Wild Dogs In The Woods

Ken Farmer and Caroline Maxwell of Wild Dogs International are making waves with light and sound. From their studio in Greenpoint they’re choreographing light robots at Palais de Tokyo, constructing the immersive Dream Machine at Red Bull Music Academy Festival, designing CFDA runway shows, and programing arts events in Camden NJ. But it’s clear the outdoor art + music festival, OPUS, is their magnum. Over emails they shared the process of bringing their community of artists into the woods. 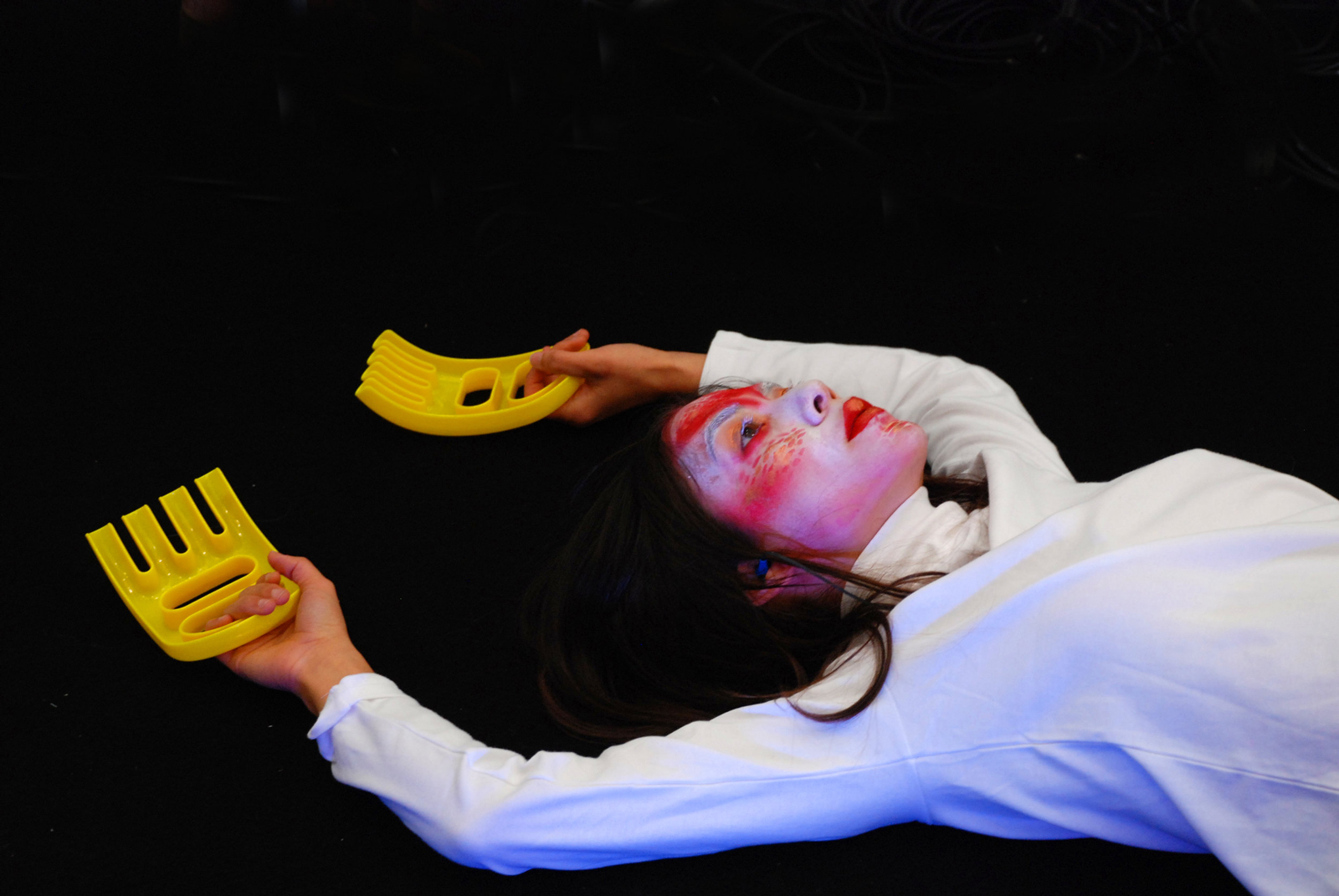 Karisa: For the second year, you’re returning to festival grounds in Columbia Maryland. Can you set the scene? What’s it like to be at OPUS, what do you have planned?

Ken: There’s this massive lawn where we’ll have a stage with projection-mapped sculptures hosting Pantha du Prince, Kaitlyn Aurelia Smith and Dancorcism, a healing dance project led by Debbie Attias. As night falls, Agnes Denes’ My Manifesto will be projected on the 200-foot facade of Merriweather Post Pavilion. From there, you enter Symphony Woods through Maren Hassinger’s Pink Light installation, and can tie your dreams to Yoko Ono’s Wish Tree. Farther down the path, Ann Lislegaard’s Owls… Some Animals Never Sleep speaks in prophetic aphorisms drawn from Blade Runner. If you look above the tree line, you’ll find Matthew Schreiber’s monumental laser sculpture Gemini that becomes a temporary site for Patrick Higgins and Monica Mirabile’s eruptive performance. Peering through the trees you’ll also find AES+F’s Liminal Space Trilogy projected across a fifty-four foot screen and projection-mapped pyramid Ultra Wet – Recapitulation by Tabita Rezaire. You can hang out in the beer garden watching films by Daniel Crooks and Sabrina Ratté or under Marilyn Minter’s video canopy where Pink Green Caviar plays overhead. If you follow the resonance of Dead Interval, Eli Keszler’s piano string sound installation winding through the trees, you might stumble upon Ryan McNamara’s dance performance Picnic or a performance by Sudan Archives before the night’s spectacular culmination with Oneohtrix Point Never’s MYRIAD at the Chrysalis Amphitheater.

Karisa: What’s been your curatorial lens?

Caroline: We created OPUS to offer a platform for visionary artists to push boundaries, disrupt conventions, and create spaces of provocation and reflection. We are commissioning works by a variety of artists, from over a dozen countries, working at the vanguard of multidisciplinary practices. All of these artists are questioning social patterns and open the space for the viewer to experience these patterns through a new lens.

Ken: I think more than anything else, the artists we work with are interested in new encounters, new experiences, new types of images. And they work with a self-awareness that frames the spectacle and provokes new questions from the audience. So we’re interested in the spectacle, but also the power in slowing down and creating spaces of meditation. The internet and the hyper-digestion of media has accelerated our collective cultural metabolism, in a sense. Many of our artists are aware of this and work within these contemporary ideas in a way that we think adds a lot to the conversation, and gets people to slow down and think about something deeply. We collaborate closely with artists throughout the year to help them develop and evolve their projects. Some of last year’s commissions went from OPUS to places like MoMA, Red Bull Music Academy Festival, Supersense Festival, FORM Festival, and Pioneer Works. OPUS is a space of convergence but also a springboard for broader opportunities for artists.

Karisa: How do you map out the space?

Caroline: We’re always asking ourselves, ‘How are we encouraging the audience to not only think differently about the world around them, but how they’re navigating that world.’ We’re not interested in providing guidance, or answers. We don’t want to prescribe the way to go, how you’re supposed to think, or what a piece means. Plenty of things in life control how we think. Our goal is to encourage wandering and for the audience to find their own paths—their own ways of discovery.

For example, Merriweather Post Pavilion, the legendary venue that has hosted artists from Led Zeppelin to Ella Fitzgerald, is going to be turned into a meditation chamber. We’ve also have arranged to have gender neutral restrooms for the first time in the venue’s 50 year history to host a sound piece entitled, The Difference Between Difference and Difference Marked By Language. The work was composed by Hisham Akira Bharoocha and 80881 (India Menuez) and explores the deconstruction of the gender binaries inherent in language. From the pavilion to the restrooms across the way, we’re interested in questioning the social design of these spaces and reinventing them. 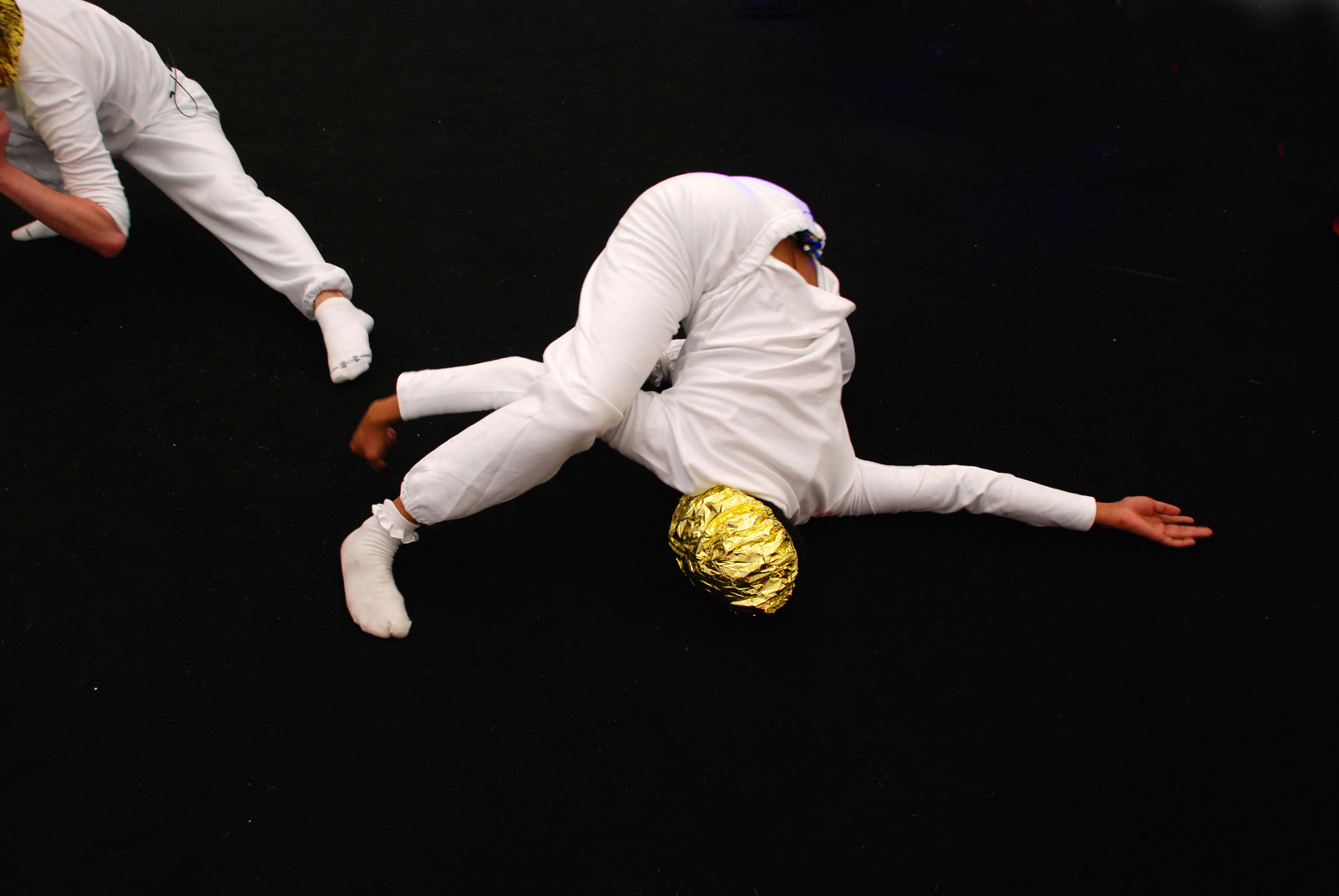 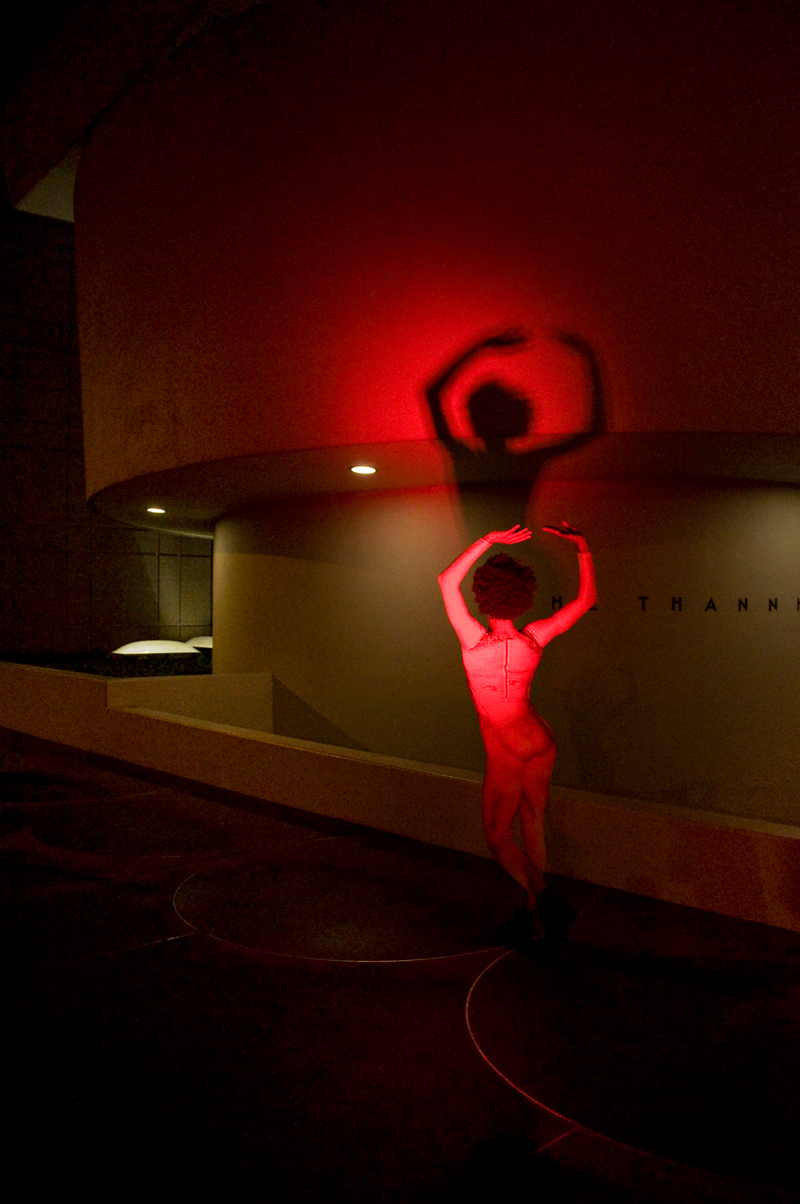 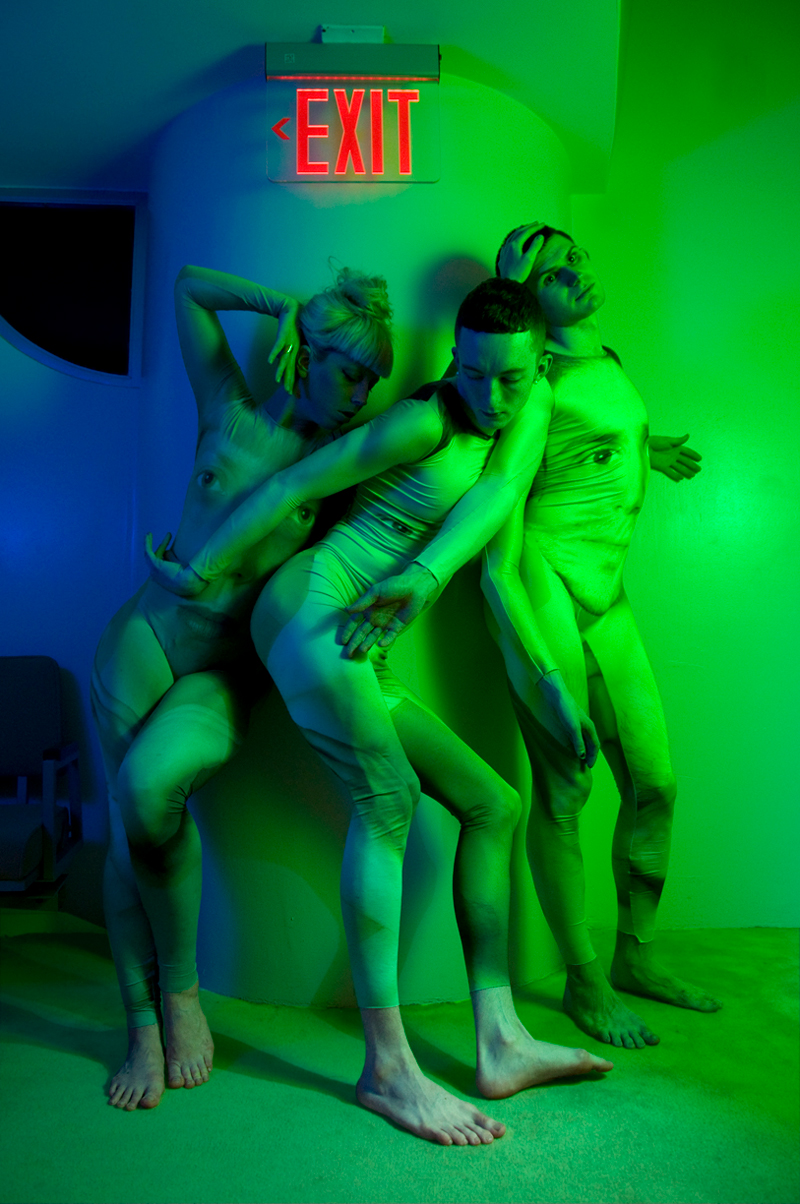 We’re interested in the spectacle, but also the power in slowing down and creating spaces of meditation - Ken Farmer 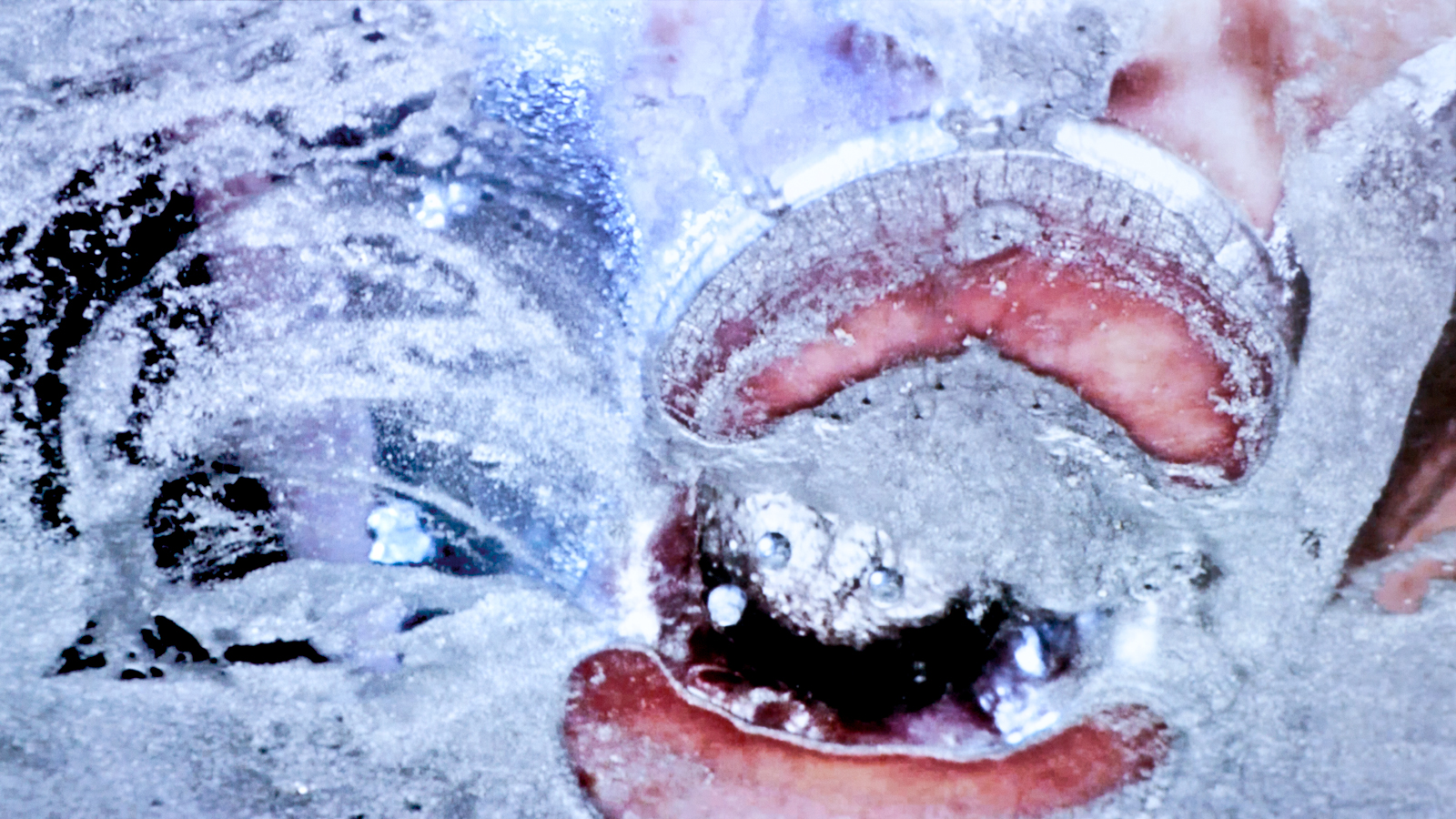 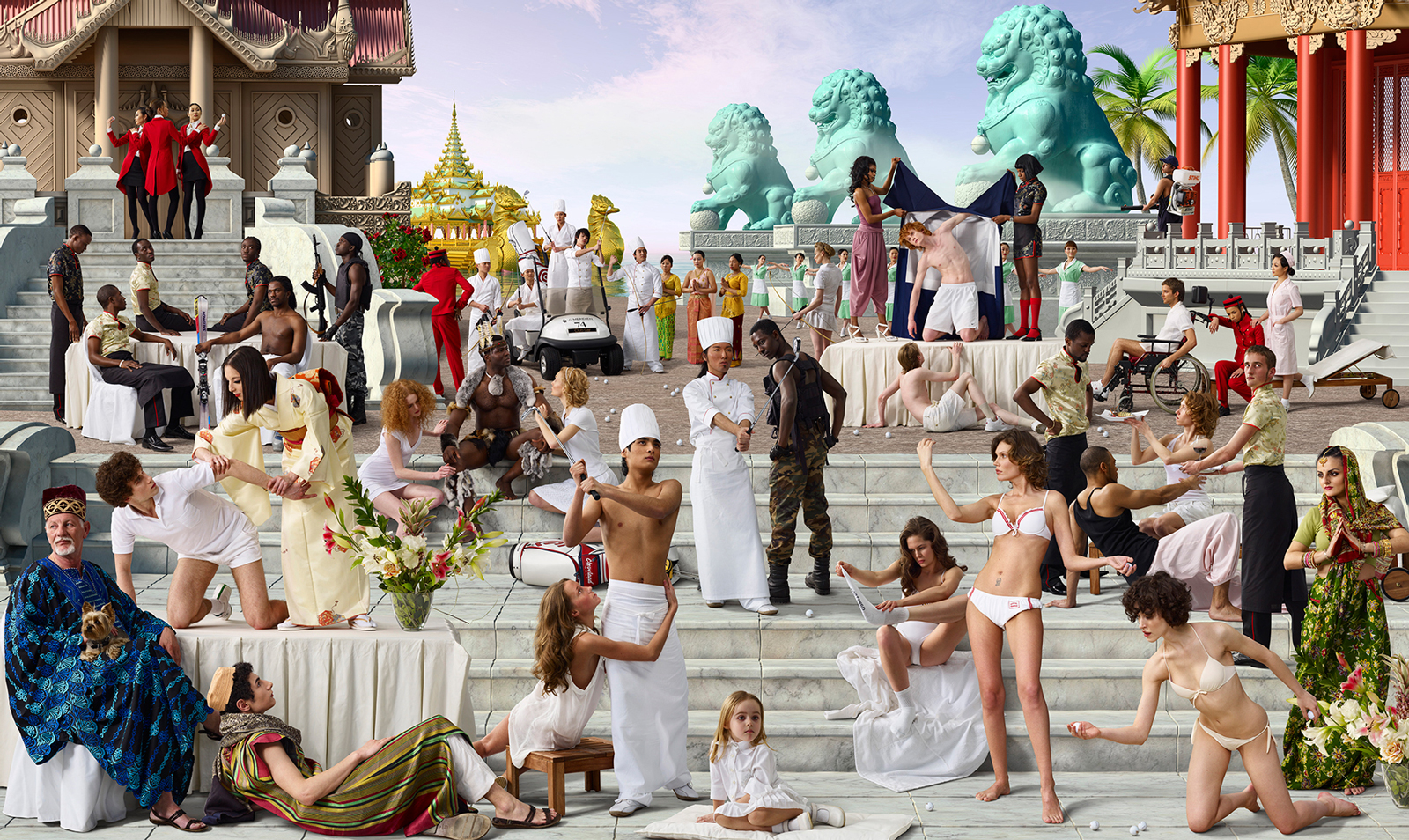 Karisa: Can you talk about the element of nature?

Ken: Definitely—when we first encountered Merriweather Post Pavilion, we were immediately drawn to the woods around the venue.

Caroline: The forest is an intriguing jumping-off point for us because it naturally has a multitude of associations, from being a place of shelter, hiding, and safety to a place of exploration and discovery. Forests make us realize how much is hidden—how much is unknown. We’re interested in what we can learn from the forest as a model for culture and what makes its ecosystem strong. The forest is a place where strength and beauty comes from diversity, collaboration, and a fertile environment. From the micro to the macro, we’re questioning what culture means from the ground up. And ultimately, we’re looking at how the creation of culture within a forest can be a model for culture on a global scale.

Karisa: For the site-specific artworks you have commissioned, did artists go to the woods and then choose an area? Or did you have places in mind for certain artists?

Ken: We had an initial vision for the site, of course, but it’s always a back-and-forth between us and the artists. They would interpret the site in their own way, and then we might have to have a reality check about what was actually possible. But everything ended up super fresh. We’re really happy with how all the pieces and projects are going to come together. It’s important to us as curators that we provide the space for artists to realize their visions. For example, Matthew Schreiber spent several days at the woods contemplating the site for his laser sculpture, but the night he saw this deer with glowing eyes in a clearing he said, ‘Okay, this is the spot.’ And so we just went with it. With Ryan McNamara we said he was free to do something anywhere on the festival grounds. This is someone whose recent performances have been at the Guggenheim, the ICA Boston—these big institutions by famous architects. He ended up choosing a small picnic table for a stage that was tucked away in the trees. It’s cool to see how artists of his caliber dealt with the unique context of the forest.

Caroline: OPUS is all about creating space for artists to explore. The first question we always ask is, “What would you like to do that you’ve never done before?” In response to that, Maren Hassinger wanted to create her first light installation for example. It’s beyond rewarding collaborating with artists like Maren and Agnes— they’re these legendary artists. Agnes is particularly close to my heart because the first job I had in art school was as her assistant, and now we’re commissioning a new piece with her.

Days later Caroline shared the 1969 Manifesto by Agnes Denes, saying “if OPUS has a manifesto, it would be this.” One line seems an apt description of Ken and Caroline: “being creatively obsessive.” 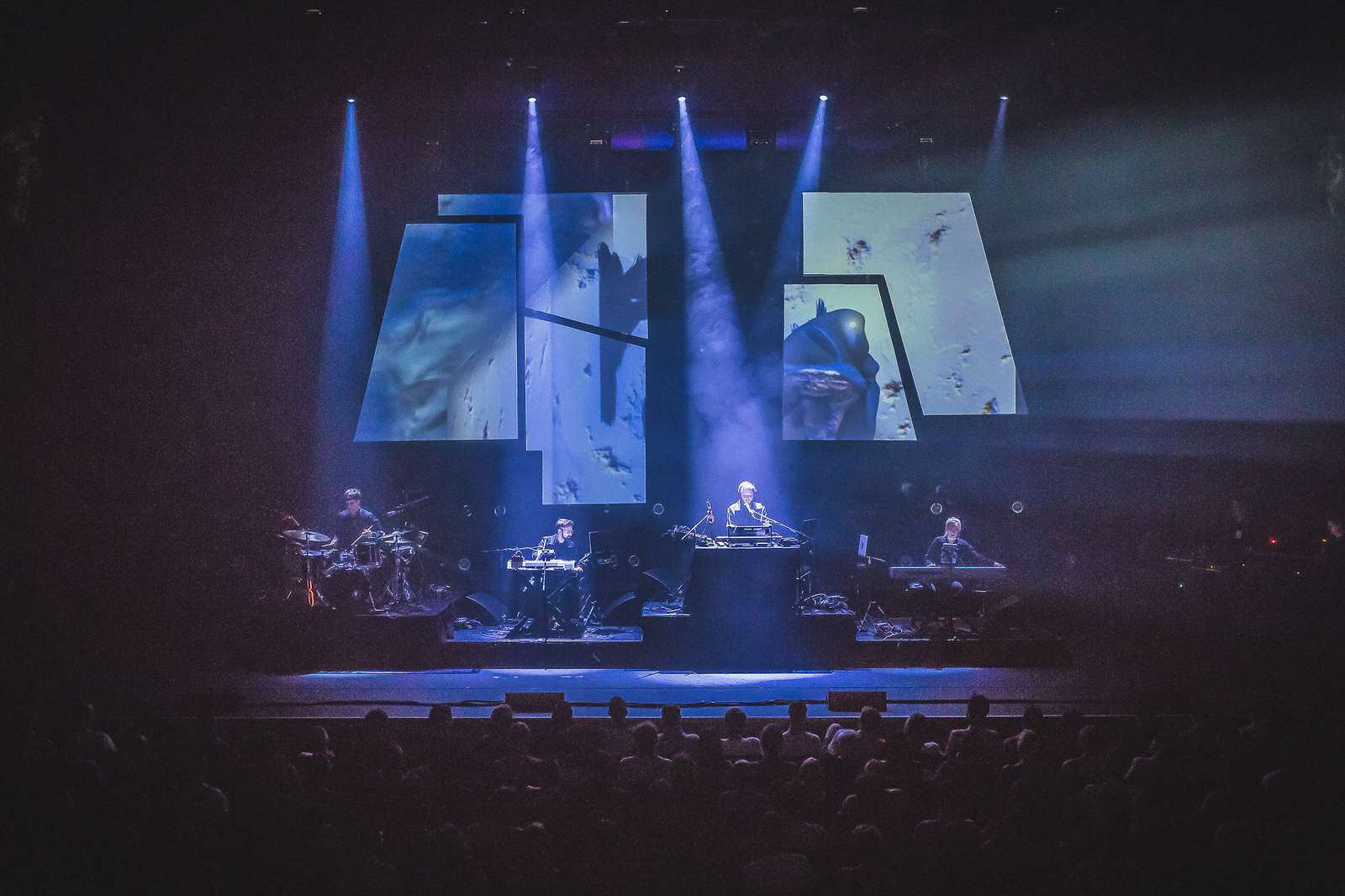 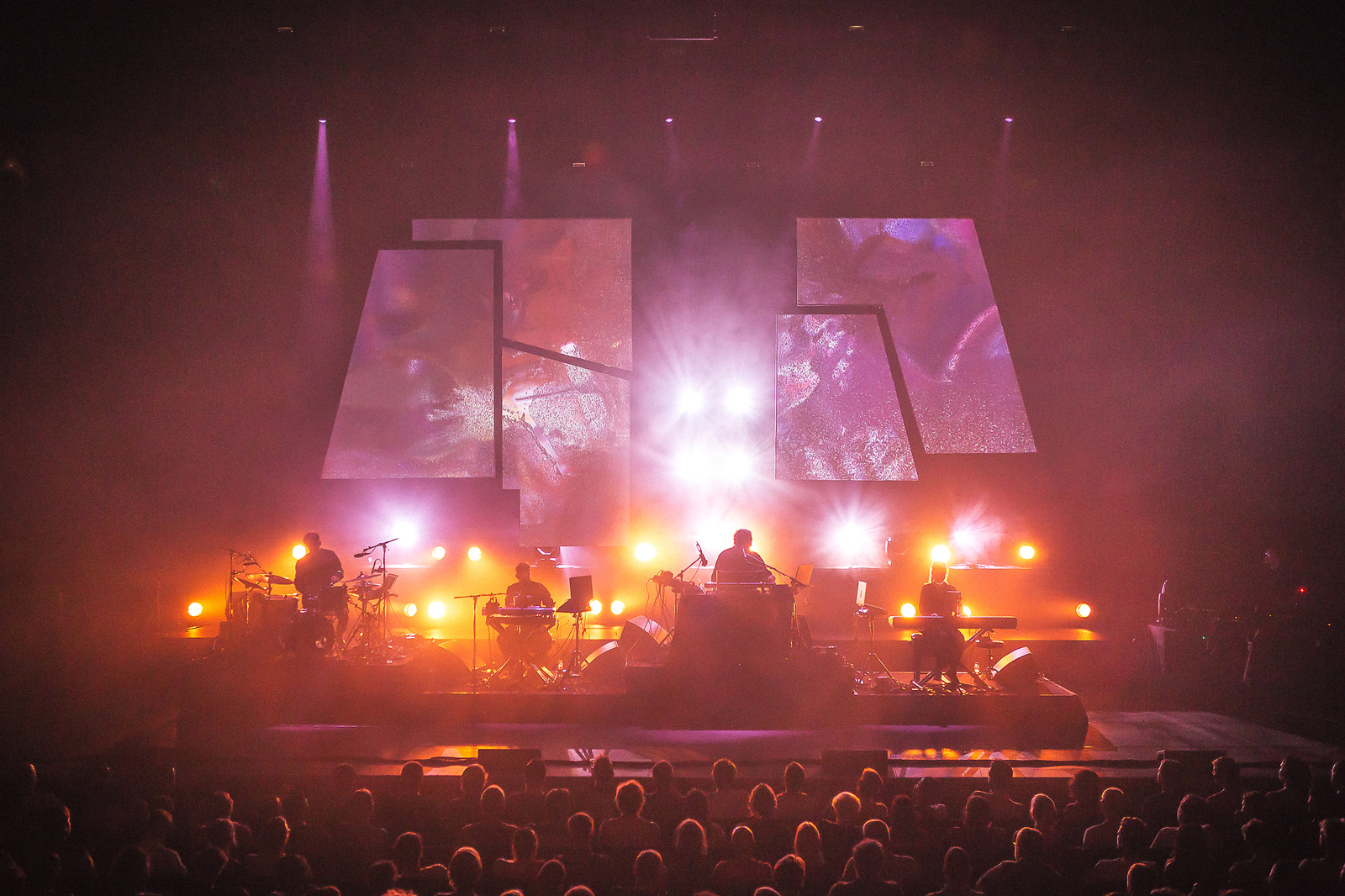 How are we encouraging the audience to not only think differently about the world around them, but how they’re navigating that world? - Caroline Maxwell 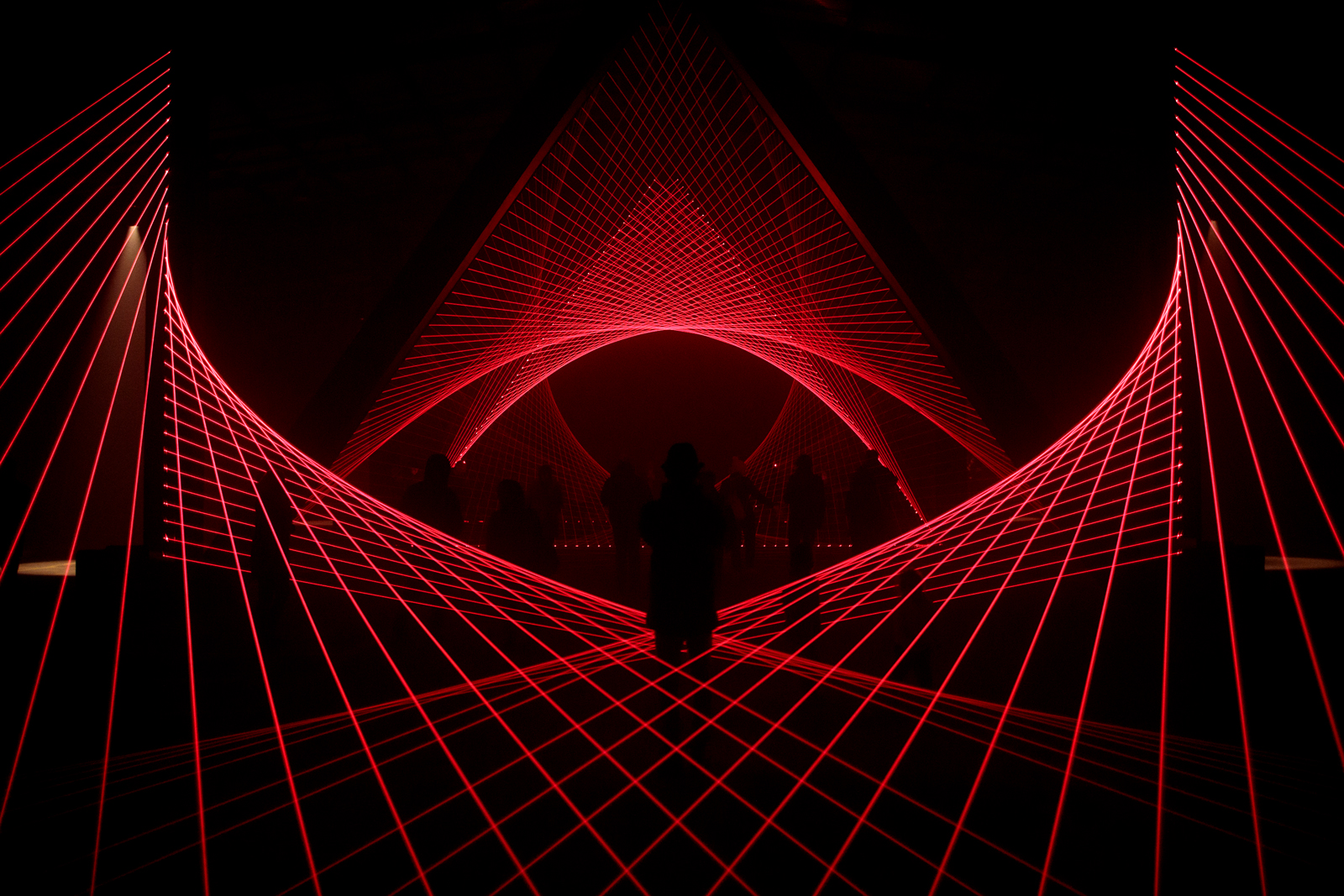 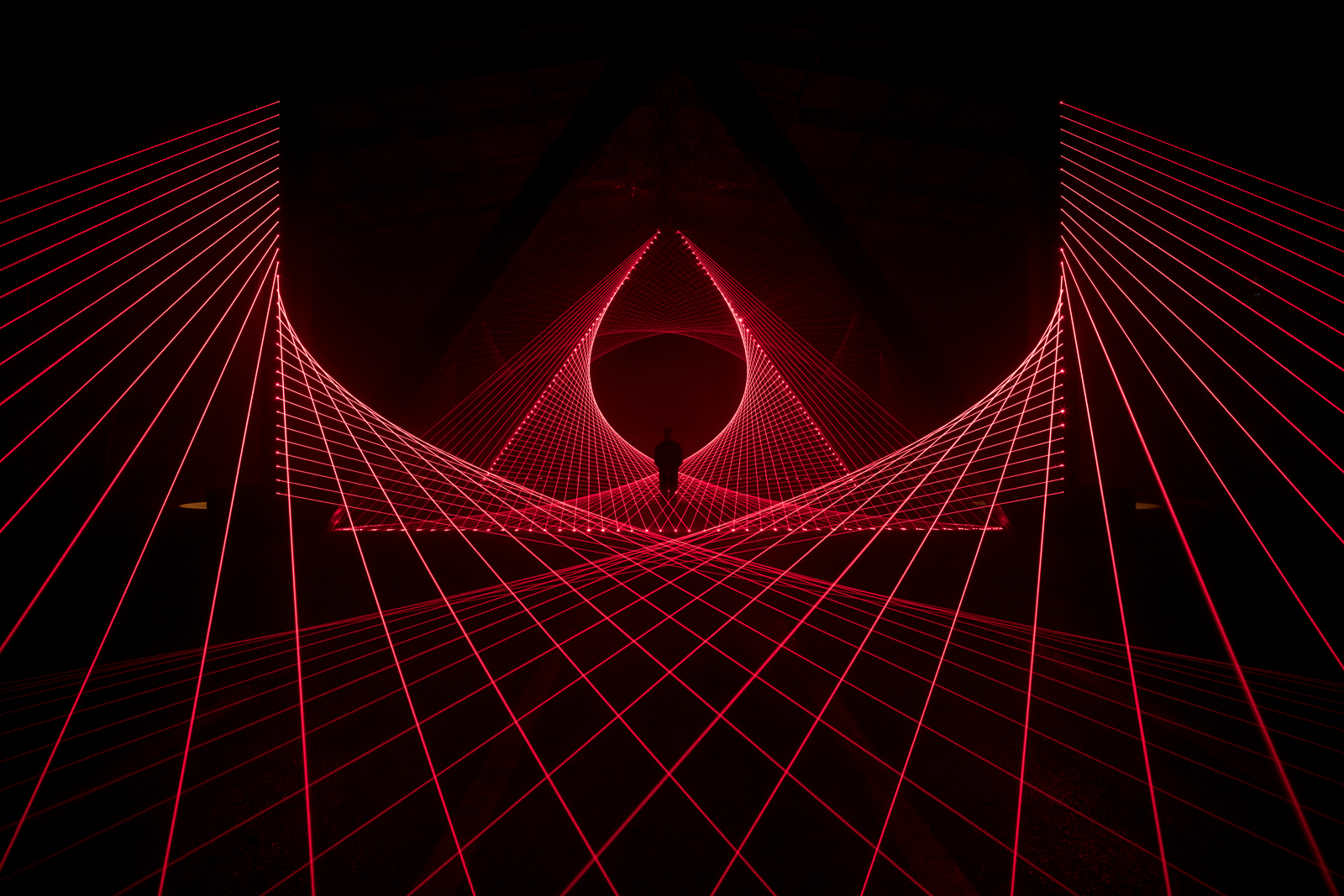