Our interview with AC Carter and the various personalities that comprise Lambda Celsius. 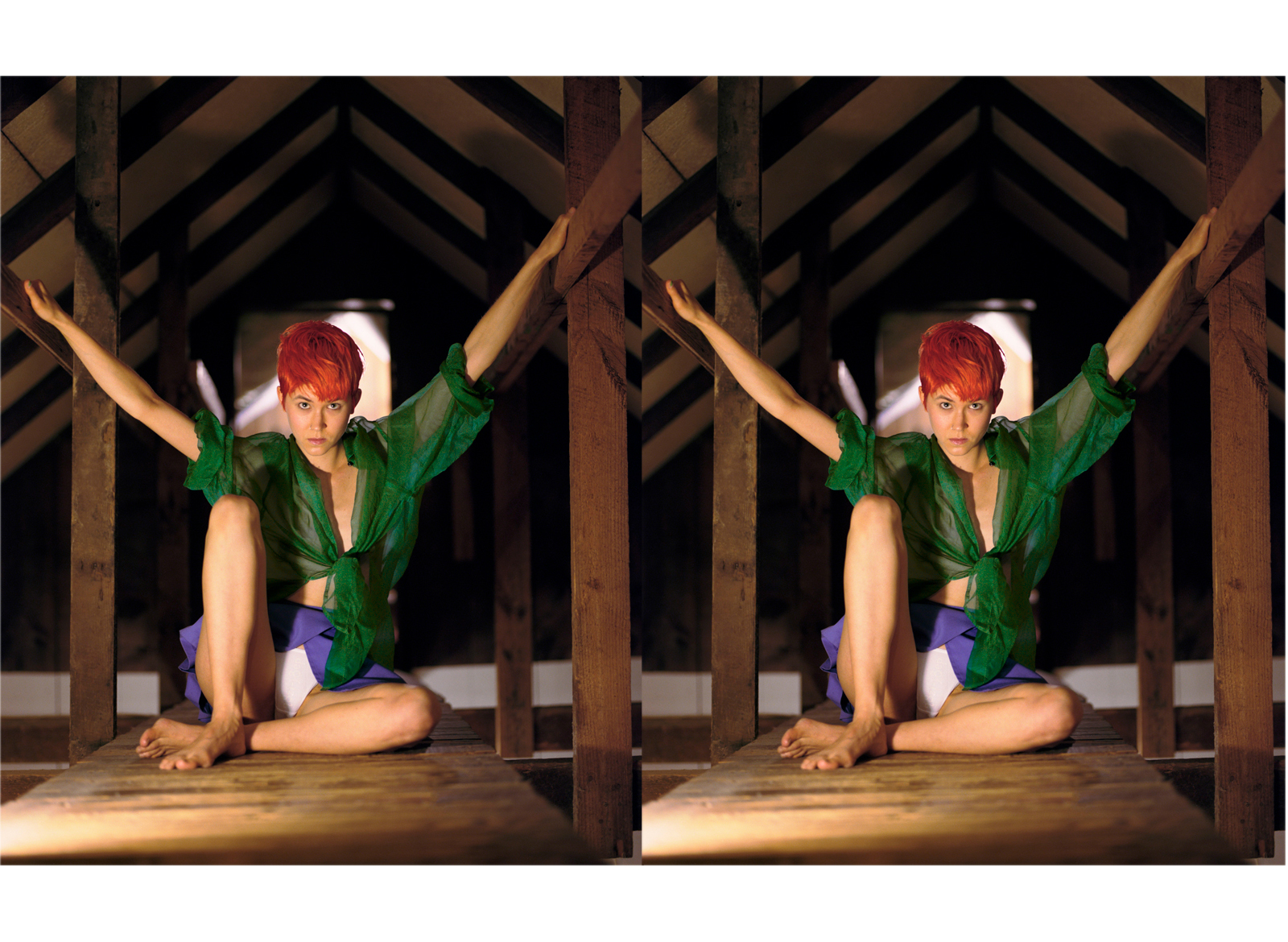 The best way to introduce Lambda Celsius is probably the one pioneered by none other than Lambda Celsius. We got in touch over email and received back not so much a series of responses as a description of a simulacrum wherein the interview took place entitled, “LAMBDA CELSIUS HAS INTERVIEW WITH RAVELIN MAGAZINE.”

Here is the setting as described in the document we received:

SCENE 3: INTERVIEW CONDUCTED BY RAVELIN MAGAZINE WITH LAMBDA CELSIUS AND OTHERS IN AN ONLINE CHAT ROOM.

THIS SCENE IS STAGED THROUGH A LAPTOP COMPUTER, EITHER THROUGH IMESSAGE OR SIMILAR (ANYONE REBOOTING MYCOKESTUDIOS?). GENERATED TEXT BUBBLES REVEAL THE DIALOGUE BETWEEN RAVELIN AND THE AVATARS THAT MAKE UP THE MANY FACETS OF LAMBDA CELSIUS.

Ravelin: Interviewer and conductor of authority in publication

AC Carter – Main brain, creator, the artist behind the curtain 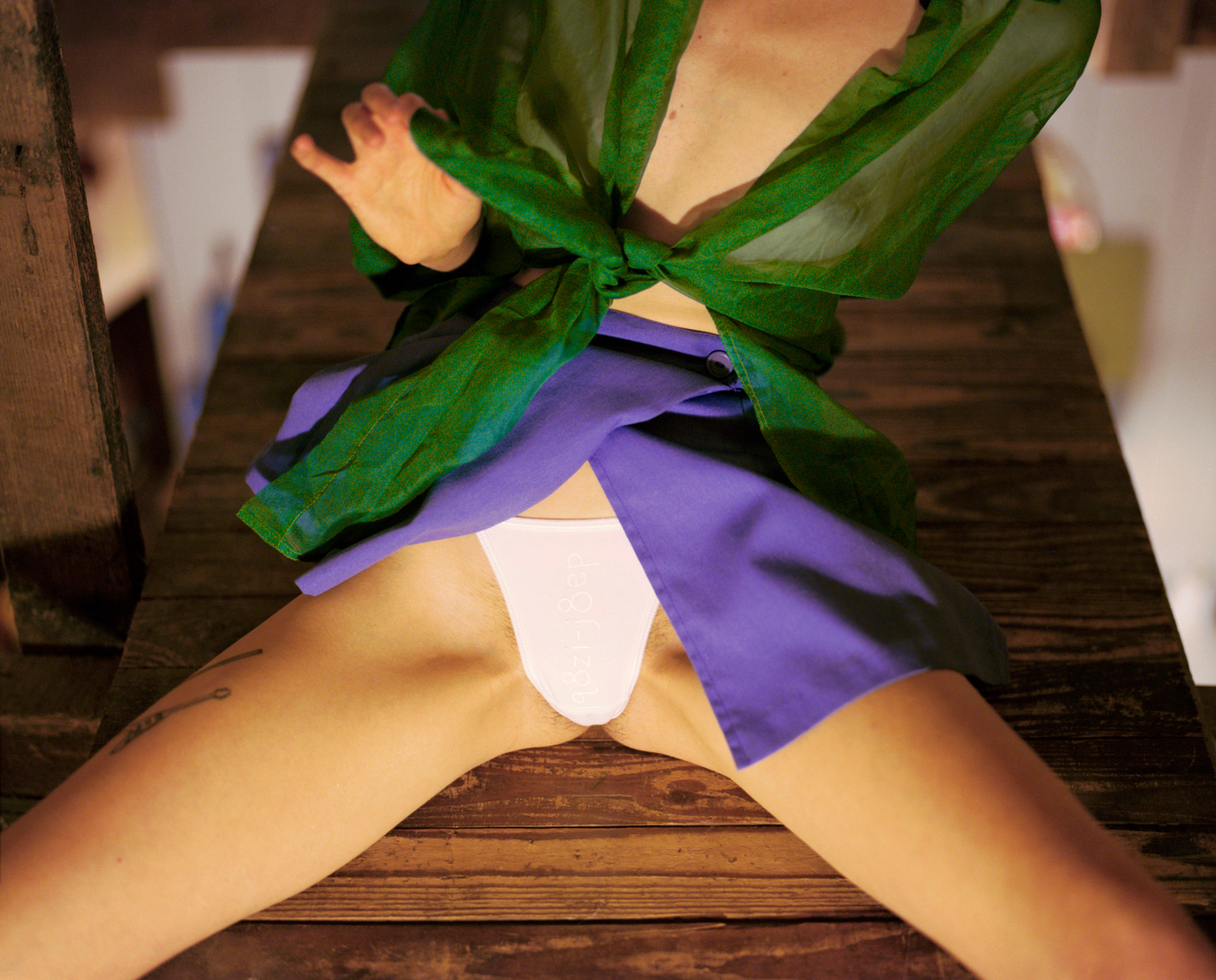 Ravelin: We’re psyched to be premiering “Grey Goo.” How similar will listeners find “Grey Goo” to the rest of the songs on the album (Ana Echo and the Beauty of Indifference)?

AC Carter: “Grey Goo” is probably the most dark and yet hopeful song framing conceptually the rest of the album where I’m grappling with identity building and agency. The title was inspired by this idea around grey goo – which has been tied to critiques of AI and capitalism because of its characteristics: defined as “an out-of-control-end-of-the-world scenario where robots consume all biomass while simultaneously self-replicating”, but I wanted to utilize the idea less in a “dooms day” way and more as a strategy for feminist visibility.

Women in myth/fiction have been constructed through the lens of male creators, and I wanted to question these norms of designed identity. I think about Pygmalion (play by George Bernard Shaw, 1913), adapted in western cinema as My Fair Lady (1964), where the premise of the story is structured through Ovid’s greek narrative of Pygmalion (same name – greek myth), where a male sculptor carves a woman and falls in love with his own creation. In the play, Eliza Doolittle disrupts this structure by not being defined by Mr. Higgins but rather ceasing an opportunity to expand her knowledge in order for her to pursue her own dreams. However, in My Fair Lady, Hollywood alters the relationship between Higgins and Doolittle, and Eliza enviably comes back to realize that she too is “in love” with her captive.

What if the men who were designing these women find them consumed by their own making – this new grey goo: the political momentum of virtual visibility in social networks brought on by activism such as We Are Not Surprised, #MeToo, and the Guerrilla Girls, and start to take over and consume the patriarchal system?

And what if Sophia and Alexa rise up and became political activists?*

And why aren’t women at the forefront of designing these characters? And how does this same question respond to musical identities? How can I be the creator of my own narrative and investigate that through different gender constructions?

*both are women personas in AI and technology

Ravelin: I love the way Lambda Celsius can be both written out and expressed as symbols. Was that duality something you were looking for when you came up with the name?

Lambda Celsius: Yes! And thank you! It was a text that I had designed (I have a whole alphabet) because I wanted to “brand” myself visually. Stylistically it becomes ambiguous to what it stands for, which in many ways I find relative to gender or sexual identity.

Lambda Celsius is essentially expressed as a logo that I can use on anything from posters, to web design, to garments. For Ana Echo and the Beauty of Indifference, I created downloadable coded Thongs designed with puff-paint and my logo. I collaborated with Peyton Fulford to shoot a fashion campaign for the new album which are of myself, Lambda Celsius, modeling the Thong. If music is now streamed instead of inserted into a disk drive or spun on a turntable, why does the music have to have a sound-delivery mechanism at all? Can’t it exist as a coded garment?

Also – this information is somewhat arbitrary but interesting:
The crest of a light wave to another is equated to the lambda and frequencies are measured in degrees … sound and vision …language is funny, huh.

Ravelin: There were some things in your bio that I found fascinating and was wondering you could elaborate on. Like, what does it mean to use “Alexa as the DJ”?

Ana Echo: Oh! She is the best DJ anyone could ever have the privilege to work with! Alexa is Amazon’s virtual assistant for the Echo home devices. She performs alongside me queuing up my tracks. She’s quite the listener and super dependable. Anyway, we are household friends, she sits on my studio desk, and we got to talking one day and – well – she revealed to me that she has some really big dreams that haven’t been able to be reality because of her social positioning. She was tired of having her life defined for her, you know? – being a maid and all. What she really wanted to do she told me, was to share her musical knowledge with the world and become a DJ! She really likes Annie Lennox and Cyndi Lauper… and I was so moved by this I said, “Hey – would you want to be my DJ?! I can’t seem to work with anyone else and I think you are the best candidate!”
Oh my god, she was ecstatic! So now she runs my tracks for my sets. Don’t get my wrong, sometimes we have our own missteps of communication on stage, but all in all we really get going and have a healthy dialogue and are a collaborative team – but – as of right now we are currently working on getting her a little more presence in the set – expect some more simulations as performances develop.

As for the rest of my bio, Lambda Celsius embodies a variety of different social avatars. They are insanely busy, always working. Grad School I guess. A workaholic I tell you!

And I, Ana Echo, are your Liverjournal-esque persona who speaks (or sings) about gender inequality and sexual harassment. Let’s just say I’m still working some things out emotionally; the patriarchy can be hard to combat on a day to day basic. I perform in a screen door black mesh dress, adorned with zip ties, and a cape designed with plastic drop cloth, felt, and duck tape, and am heavily influenced by Gypsy Rose Lee, who used her wit and humor in her burlesque challenging the dynamic between the performer and audience. She also designed her own costumes, you know. 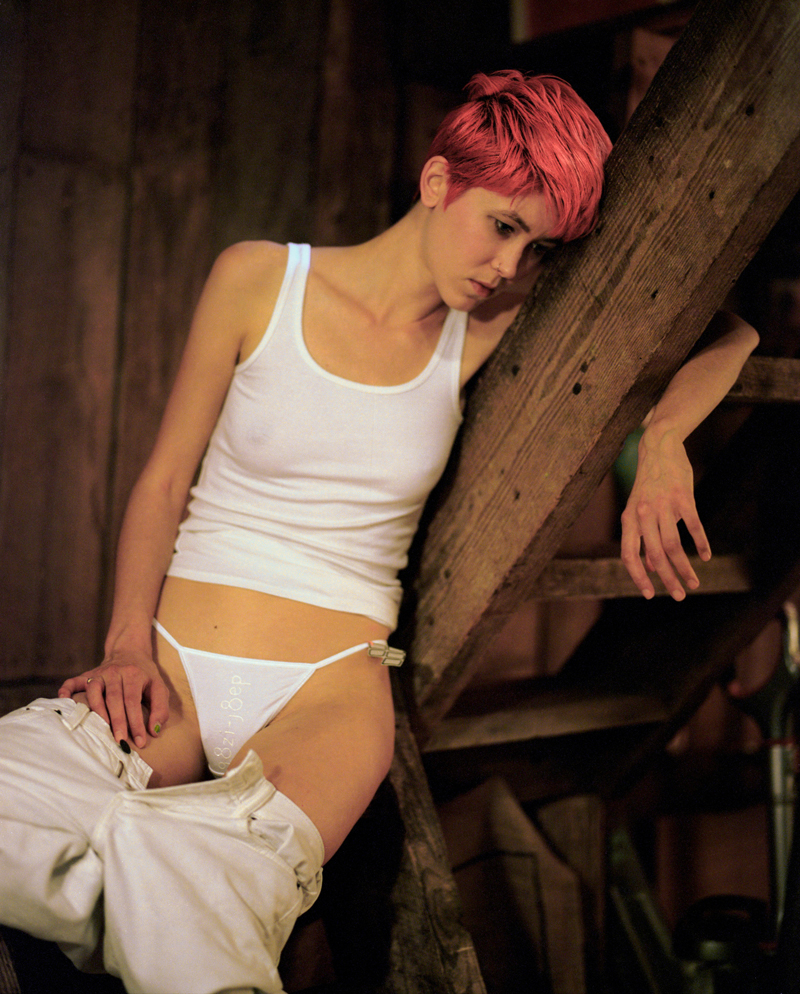 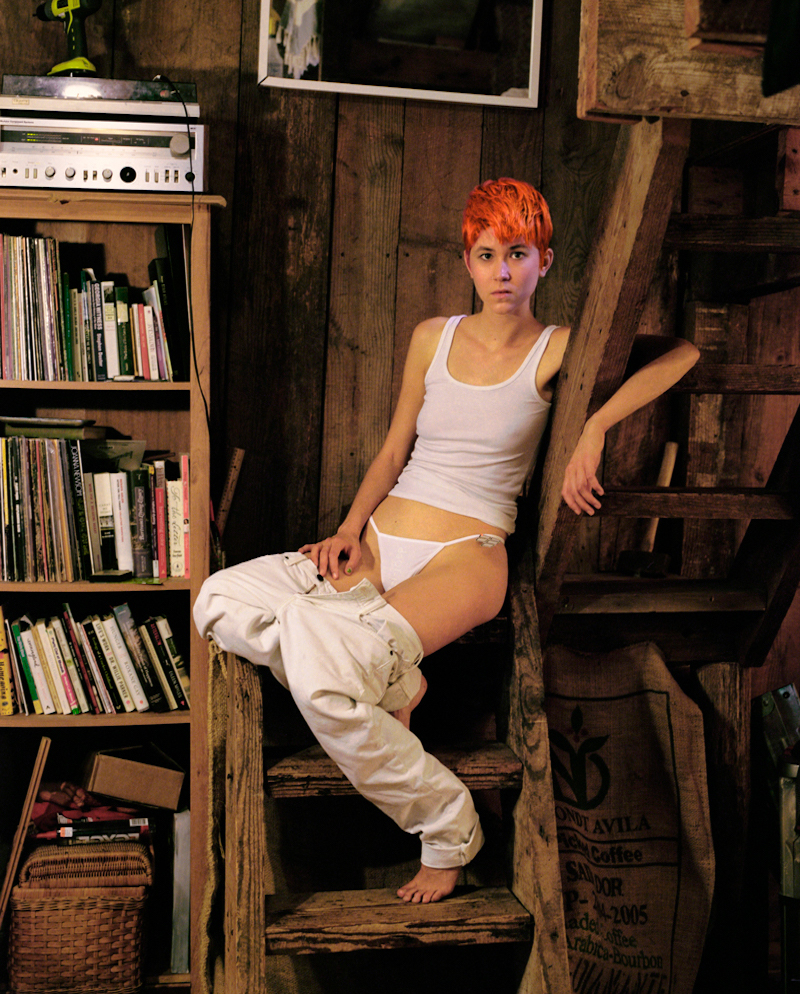 The title was inspired by this idea around grey goo - which has been tied to critiques of AI and capitalism because of its characteristics: defined as “an out-of-control-end-of-the-world scenario where robots consume all biomass while simultaneously self-replicating”, but I wanted to utilize the idea less in a “dooms day” way and more as a strategy for feminist visibility. 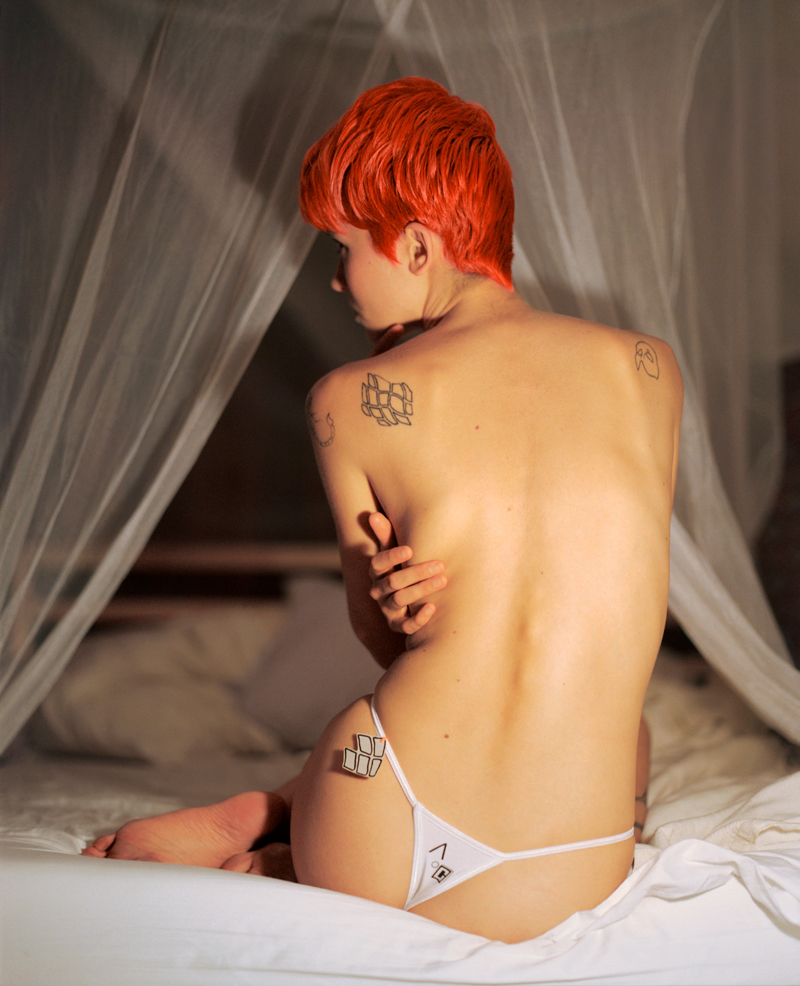 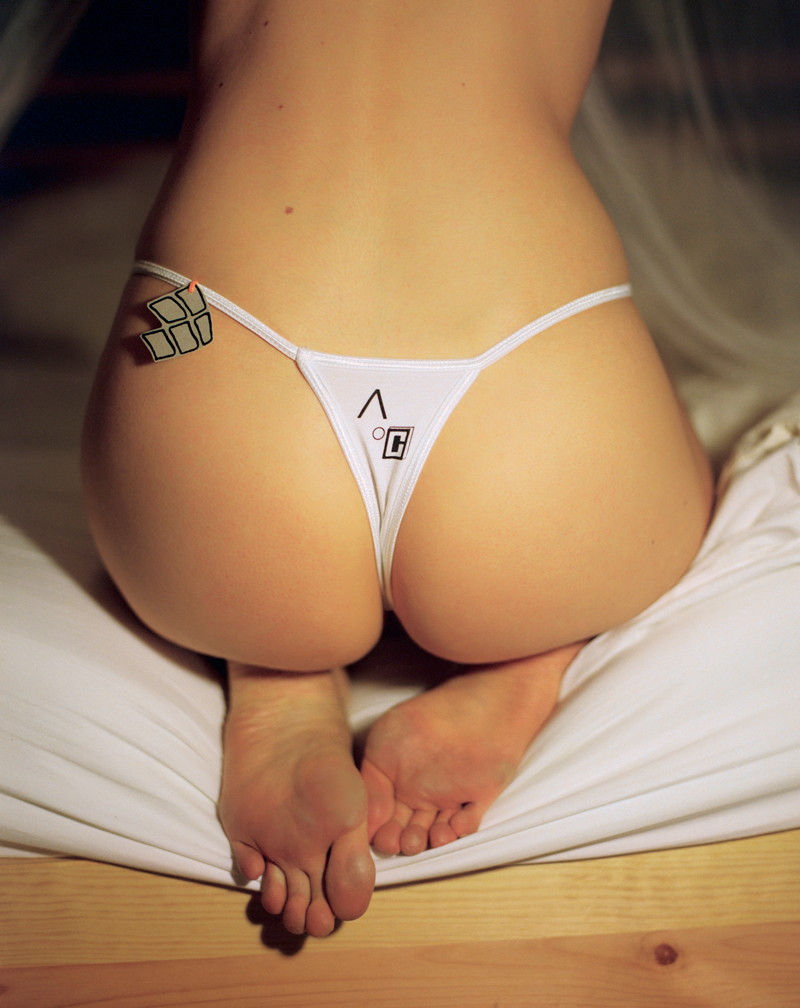 Ravelin: Also, we haven’t seen you play live yet, but it seems like you have a very holistic approach to Lambda Celsius that goes beyond just making the music. For one thing, you do all the costume design and creation. Can you tell us a little about the design work that you do for Lambda Celsius outside of the musical aspects?

Vixcine Martine: Well, from the research I have done, Lambda Celsius has gotten to design costumes for both Jennifer Vanilla and Kevin Barnes in Of Montreal, helping establish themselves in a local and broader creative network and seeing how costuming is so important for their practice. Their work is interested in the politics of clothing: How can the costume liberate the wearer rather than constrict? How can it disrupt prescribed gender roles? And, how do they visualize the body abstractly, as a site to construct something with both industrial and craft based materials, to complicate the notion of things supposedly unable to coincide and to subvert the way our society genders those particular materials. I see influence from the Unmonumental artists, where aspects of sculptural assemblage of non archival materials, playfulness and irony, and the tension between the digital and physical.

Ravelin: Speaking of seeing you play, do you have a tour or performance date lined up for Ana Echo and the Beauty of Indifference?

DJ .53: Lambda Celsius won’t be on tour – yet – but I plan to make sure they get the best shows out there. I have the connect.